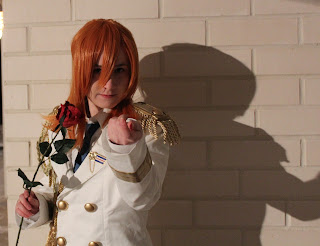 Oh new followers ~ (feel awesome >D,okay *ahum*..) but asdfg really thanks for you all guys who read my blog.  You're bothered to read my blog and I hope you understand my bad English. But I try my best with my english.  ^^' And thanks course for all visitors ~ But anygays! Last weekend I had little photoshooting with my friend. We take some picture of my Ren and Rin cosplay. Well it was little dark when we took pictures of Ren cosplay. And well those weren't pretty good. But at least I got some pictures of that cosplay. I wanted to take new pictures of my Meltdown cosplay and I got them yay ~  Outside was little cold when we go to take them (about -16 ) But little cold didn't stop us! I really want start some next year cosplays,but fufufu I don't have time/money ( T ^ T ) However, then I can't decide which to start,derp. I also have planed to do Rin's Senbonzakura version to next year. But I don't do it to con. It just only plan.. ~ But yeah h
9 kommenttia
Lue lisää 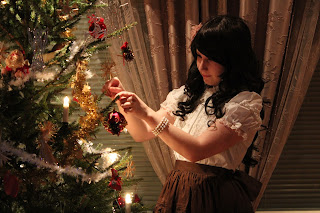 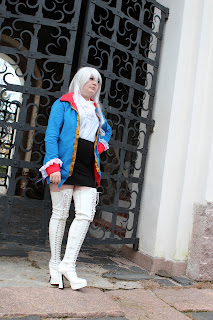 I was with my friend photoshooting this weekend. Gaitsu cosplayed Gakupo's sandplay and Janika cosplayed Fem prussia  and me Luka's sandplay wuhuu ~ We were in the church photoshooting. (grannies looked at us a little bit.. xD ) Before we went to the church I was so ninja and I fell on my back in our stairs. Gaitsu and Janika scared when I lay on stairs. (actually I start laught xD ) We arrived at the church and there was little could. We have fun and course get good pictures ~ :3
11 kommenttia
Lue lisää 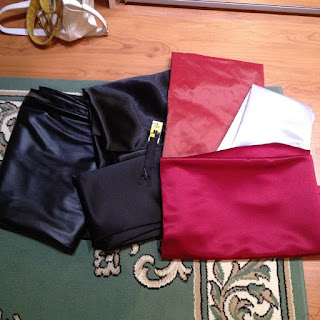 Today I was buying fabrics. First I had to buy fabrics to Kazama cosplay,but because my mom I didn't. So I bought fabrics for Len cosplay. Maybe tomorrow I start do that costume ~ :3
Lähetä kommentti
Lue lisää 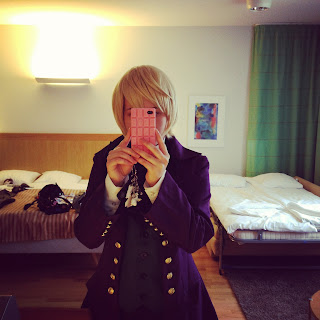 Tracon was this weekend. I have sooo much fun and I saw my friends ~ Now I'm so tired I don't write a lot to this blog. But on Saturday I cosplayed from Kuroshitsuji II with my friend. I cosplayed Alois and my friend Hannah. We didn't take any photos of those cosplays,maybe some day I but some picture if I find it from someone. : D On Sunday I cosplayed Otoya Ittoki from Uta no prince-sama. (Debut version) I was so amazed people took pictures of my cosplay. But someone knew I cosplayed Ittoki's debut version TuT Well maybe utapri is not so popular in Finland? Well I'm not sure but yeah. I have so much fun! And thanks for all who was there! :3 I was little lazy take pictures : / Here is some picture. I have only some random hotel picture of my Alois cosplay xD
6 kommenttia
Lue lisää 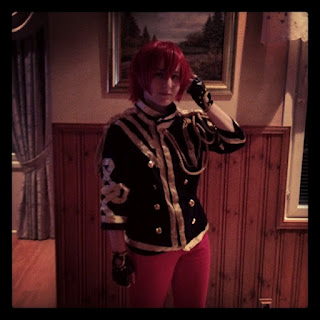 Finally it's done! Aahahah....I really hate sew that jacket. (sometimes I like..when it was easy.) It's little fail/derp,but that is actually my first jacket what I sewed. The result is good,however, it would have been better to sew...but for my sewing skills it's good. : D Here is some pictures.. (haha,my messy room.... xD )
6 kommenttia
Lue lisää 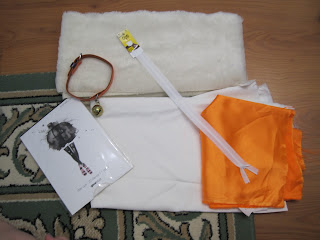 I was with my mother to buy fabrics. And I found suitable fabric for cat ears and tail ~ So finally I was able to start sewing Gumi's dress. And I really hate look for something to costume. It was very hard find good stay-up socks. Okay there was white stay-up,but they were bad. : / Well I found stay-up socks =3= I started sewing that dress. *ahem* first I cut the fabric wrong and I looked for a long time that fabric... Luckily I had some white fabric. ^^' But I'm At least a success today! (not only fooling) I sewed cat ears and tail! Hohohoh ~ my first time I used a fur fabric. After all result was pretty good. Hmmm...now I don't have more writing abot this cosplay...The next time surely ready dress? My friend makes that green vest this cosplay o3o Thanks for her ! ~ some pictures ~ Cat ears ~ (my room is so beautiful.. xD) sewing ~ o3o and my cat xD
Lähetä kommentti
Lue lisää 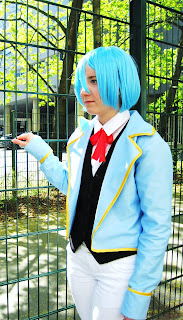 Desucon was last weekend. (It was a three day) I have so much fun! And good con (like always desucon is). There was a lot of good programs, but I managed to visit only two. On Friday I cosplayed Sakuya Le Bel Shirogane from Hatoful boyfriend game. My friend Chiryoto cosplayed Yuuya. On Saturday I cosplayed Rin Kagamine Love is war version with my friend who cosplayed Miku Hatsune's love is war version. And last but not least Sunday I cosplayed Ririchiyo from Inu x Boku SS. I don't know why I was a little distressed with my Ririchiyo cosplay. ^^' But however I have fun and that was good think! :'D Pictures from Desucon cosplays: Sakuya  Rin and Miku  Ririchiyo
Lähetä kommentti
Lue lisää

Course I have plans for 2012. I have sewing hmm...7 costume. Very much..yeah I know. For Tampere Kuplii in May, I will be doing one costume. And that little cute character is suprise suprise Ciel Phantomhive. One day I just think why not Ciel's circus version. That costume is really cute and it would provide a small challenge for sewing. The next con I'm going to is Desucon in June. Desucon is three day,so I have make three costume. Friday I going to be Sakuya and I have with me Yuuya! :3 So me and my friend are cosplaying epic bird brothers. ( Yes,you read right BIRD ) Sakuya Le Bel Shirogane from Hatoful Boyfriend Saturday I will be going to cosplay Ririchiyo Shirakiin. Because her costume is so asdh *w* I really love japanese clothes and I like that anime too. I hope that costume succeeds. Ririchiyo Shirakiin - from Inu x Boku SS And on Sunday I cosplaying Luna Child. I think I need to spend a lot of time making this costume,because dress. I would als
Lähetä kommentti
Lue lisää 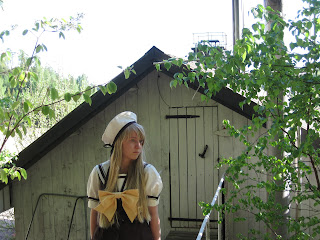 I'm Janita,Zani,Zanitas but you can call me Zani or whatever you want call me. So I start cosplaying in 2010. I'm in 9th grade and then I go to vocational school next summer . ( Probably learn to chef.) I start cosplaying 2010 when I was 15 years old. I don't know how to sew properly then. Or, in fact, I didn't dare even to try out a sewing. So I have ordered many of my dress . But later , however, I took myself to "hand down" . Well now I have done 4 dress! My first cosplay was Kareha from Suffle!. I cosplay Kareha in summer 2010. So I put that costume in Desucon and that was my first con. Secound cosplay was Belarus from Hetalia. I was then some very epic hetalia fangirl moment in 2010. I cosplay Belarus in some little con. I've had cosplay Belarus in some   Hetalia meetings. My three cosplay was Ciel Phantomhive from Kuroshitsuji. I don't know why I wanted to cosplay Ciel. But well I ordered that blue costume from
Lähetä kommentti
Lue lisää 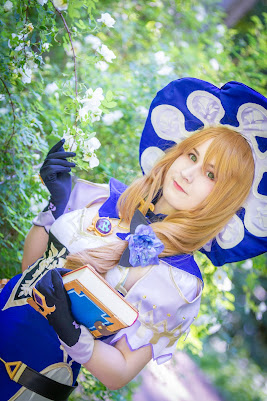 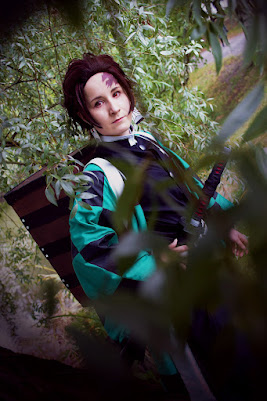